People often misunderstand success as an early achievement, but usually, actual success strikes at a later stage of life. There is no age limit where one can say they are successful enough in their field of work. This article is about a female entrepreneur, who climbs the ladder of triumph at 50 yet again proving age is just a number.

Falguni Nayar, who thrived in a Gujarati family, is an MBA Finance graduate from the Indian Institute of Management, Ahmedabad. Born on 19th Feb 1963, Falguni had her roots in business since childhood. As her father was a businessman, she embraced the trading world gracefully. She always aspired to be an entrepreneur and had great views on women’s empowerment.

Initially, after finishing her master’s, she was appointed as an investment banker in Kotak Mahindra Group, where she dedicatedly worked for 19 years. Later in 2005, she was promoted to Managing Director and she proved herself as an extravagant leader. Falguni had always dreamt of starting a business of her own, so there she at the age of 50 quit her job in 2012. Through her observations, she was agile to figure out the target niche for the business. Following other well-known entrepreneurs like Ronnie Screwvala of UTV and Ajay Bijli of PVR Cinemas, she stepped on the entrepreneurial journey.

Falguni’s idea of creating Nykaa was however an inspirational one. She met intriguing brands like Sephora, who guided her in using beauty products appropriately. Apart from this Sephora taught her about the type of products in detail. However, Falguni is not a fan of such products, but she was inspired by the concept of branding beauty products in the most elegant manner. She mentions in an interview, that she believes the lack of information on beauty products was what refrained Indian women from buying these cosmetics online. Finally, after getting the pieces of the puzzle in place, Nykaa got wings in 2012. Her dream of a multi-brand retailer store got a huge platform as it was unique.

The word “Nykaa” has its roots in the Sanskrit language, meaning Heroine. Falguni’s vision behind the name points to women’s empowerment. Inspired by observing the western trend, Falguni decided to rejuvenate the concept of cosmetics. From her childhood, she had witnessed the hardships of females purchasing cosmetics from their local neighborhood store compared to the huge high-end beautifully attractive stores in the west. She believed that girls and women had to compromise with their beauty products as they were sold by men with no actual information for the product. Moreover, no tester kits were available for them. Hence, she started with Nykaa with a revolutionary vision. 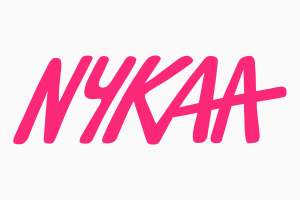 Falguni’s goal was to offer the public an online or physical store, where they can receive genuine products and try the colour shade beforehand. Nykaa was also prepared to stream tutorial videos for the make-up products. Nayar believes that the tutorial is a masterstroke for Nykaa and these videos excel in the cosmetics world. Steadily, Nykaa offers video tutorials from celebrities like Janhvi Kapoor and beauty influencer Debasree Banerjee.

Nykaa has undoubtedly changed Indian Women’s perspective of beauty shopping. There were days when women simply bought red lipstick and eyeliner, but now with women being more independent, the sales of beauty products are rolling high. This revolutionary change is successfully being instilled by Falugni Nayar. In an interview, Nayar mentions Nykaa to be a genuine store rather than a discounted one. They would happily offer the exact colour lipstick with a trial facility over attractive discounts. With this concept, Nykaa swiftly entered the skin and makeup products along with shampoos and daily use cosmetics.

One of the most successful Self-made entrepreneurs: Falguni Nayar

Nykaa has come a long way since 2012. With raging success, Nykaa is now listed as an IPO. As soon as Nykaa’s CEO announced its IPO listing on 10 November, it received an overwhelming response. The company’s shares rose to a whopping 89 percent on its first day. With these amazing figures, Nykaa’s shares are now worth $6.5 billion. Nykaa sells more than 300 Indian and International brands making it the country’s top retail startup. Falguni believes that the company still has a long way forward.

Nykaa’s CEO has put forth an exceptional example of a successful startup. Falguni along with her children by her side inspires many young female aspirants to confidentially pursue their dream startup project.