A historical moment: Who are the 3 Women sworn in as Supreme Court Judges?

History was created in the Supreme Court on 31 August 2021. 9 judges including three women took the oath of office simultaneously for the first time. Three women: Justices Hima Kohli, BV Nagarathna, and Bela M Trivedi are among the nine new appointees to the Supreme Court, marking a historic moment for gender representation. 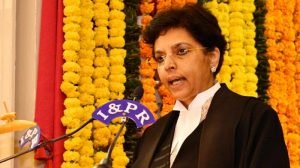 From the Telangana High Court, Justice Hima Kohli is promoted to the Supreme Court. Just two days before her retirement, she was sworn in as a Supreme Court judge and will have a term until 2 September 2024. The Delhi High Court appointed her as an Additional Judge in 2006 and made her a permanent Judge the following year. Judge Kohli is a graduate of St. Stephens College, Delhi with a degree in History (Hons.). She played an important role in ensuring that people did not face denial of medical treatment during the pandemic as Chief Justice of Telangana. She passed several orders attempting to ease the hardships citizens were facing. With a firm approach, she enforces executive accountability and defends women’s rights. From the Karnataka High Court, Justice BV Nagarathna is promoted to the Supreme Court. Daughter of former Chief Justice of India ES Venkataramiah, Justice Nagarathna is in line to become the first woman CJI in September 2027. She began practicing law in 1987 and opened her independent chambers in 1994 until her elevation as a judge in 2008. Aside from arbitration and land acquisition, she has worked in various legal disciplines including family law, administrative law, constitutional law, and commercial law in supreme courts, high courts, and trial courts. Her advocacy of women’s rights is strong. A number of notable orders have been rendered by her, including ones on Covid-19 and the plight of migrant workers. 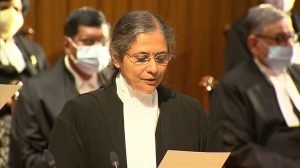 As of now, 33 judges sit on the apex court, out of the sanctioned strength of 34. Though women now make up the highest ever percentage on the Supreme Court, one still has to wonder:  Does 4 out of 33 stands as adequate representation?